Well I ventured home today to spend the holidays with my fam, and I flew up instead of driving the whole way by myself. Luckily New Bern has its own airport, and it's not too far from the apartment. So, I only had to wake up at 4 a.m. to catch my 5:30 flight. We got there as the airport was opening (being so used to BWI, I didn't know airports closed) and I quickly discovered my plane was the only one there. No one arrived in New Bern, the plane must have just been sitting there waiting for us. And it continued to sit, as we were delayed an hour due to fog. And after seeing how bad the fog was outside I decided an hour wasn't really bad at all.

Now on the plane, and an hour late I realized I would be pushing it to catch my connecting flight from Charlotte to BWI, which was to leave at 7:51. I wasn't scheduled to arrive in Charlotte until 7:58. Pretty close. The pilot assured us that Charlotte was experiencing delays as well and we would all most likely make our connections.

Lucky me, the Baltimore flight was one of the few NOT delayed, or cancelled. And, it also happened to be on the complete opposite side of the Charlotte airport, the last gate in it's concourse. We also arrived at the last gate in our concourse.

I'll take a minute right now to tell you about the first plane. I've been on small planes before, and ones with propellers, but this time I got the seat right next to the propeller. I couldn't take my eyes off of it, right outside my window, about 4 feet from my face spinning at an ungodly rate. Anyway, this plane was so small that it didn't fit at the terminal, so we had to walk across the tarmac at Charlotte. I don't know if you know the Charlotte airport, but it's huge. It's like walking across the tarmac at BWI. Weird.

The Charlotte airport is so big in fact it took me a good 10 minutes to walk from my arrival gate to my departure gate. Conveniently enough, that was 5 minutes too long for me to make my connection. I've never missed a flight before and I didn't know what to do. Well I wandered around until I found a long line of familiar people. They were all from my previous flight, and had apparently missed connections as well. It ended up that I faired better then most, and I made it on a 9:45 flight out of Charlotte to Baltimore. No standby either, I had an assigned seat! So I have now arrived safely in MD, and my luggage even made it in on the same flight I did, which I am EXTREMELY grateful for! So I'm home with everything I need and I can't wait for the holidays to get started!
Posted by Kalyn at Saturday, December 20, 2008 No comments:

Jack likes to find places to hang so he feels close to us when we can't devote all our time to him. Yesterday he made his way into the cabinet while we were cooking dinner. And when it came time to go to sleep and he couldn't jump onto the high bed himself, he snuggled in my laundry in the closet. He's such a sweet boy! 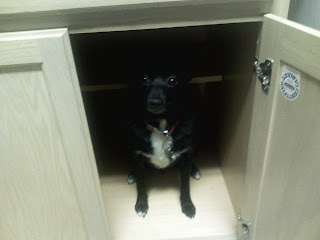 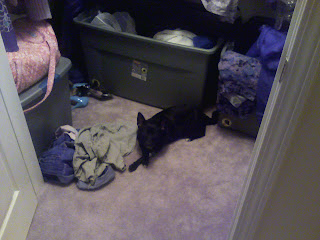 It's a very rainy day in New Bern, and with my new (but limited) movement of my left thumb I was excited to be able to get some things done today. So I found where the laundry room is in the apartment complex, and took over two loads. Now that it's all there, it's stuck because the skies have opened up and it would be completely pointless to carry back clean laundry in a monsoon.

While I'm sitting around doing nothing, I feel bad for all three of my boys. Patrick who has been out on the range all week, is out there yet again working on his weapons quals for deployment. In the beginning of the week he had freezing weather, and now that it's in the 70s, he's got torrential downpours. Here at the apartment, Winston and Jack want nothing more then to go outside. And with the way it's raining, there's no way that's happening. So we compromised. I took them out on the covered porch. Here are some pictures of our adventure... 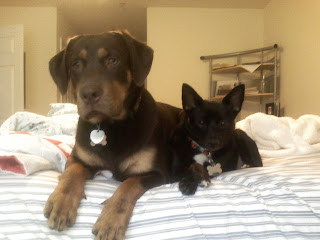 Winston and Jack snuggled up in bed together saying "Mom will you please do something with us?!" 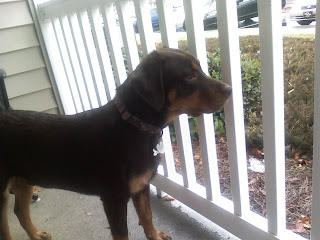 Winston liked to get outside for a little while, even though it was still pretty wet on the porch. 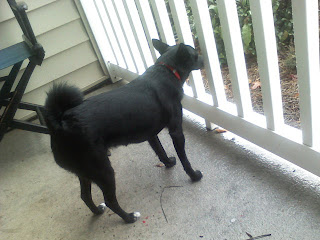 Jack gave it a try, but one drop of water on his head and he decided it wasn't for him. 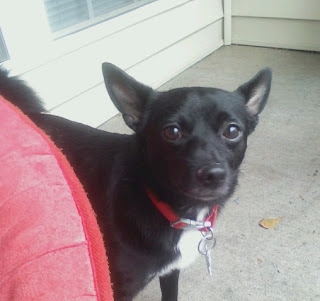 Jack spent most of his outdoor time hiding from the rain behind mom's red chair.
Posted by Kalyn at Friday, December 12, 2008 No comments:

Well now that I'm officially down in NC to help Patrick out, I thought it would be nice to cook dinner. If you know me, you know my idea of cooking is Ramen or heating up leftovers in the microwave. So Sunday night I was attempting to slice apples for a salad, and wouldn't you know the serrated knife I was using slipped and cut right into my thumb. It's not so bad, it didn't need stitches or anything, and the doctor said the feeling should come back sometime between next week and next year. In the meantime, here's an entertaining picture of what happens when I attempt to cook. 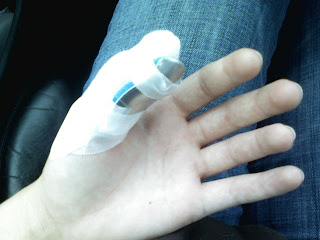 The Fam and I went on a road trip yesterday to Longwood Gardens. They had their Christmas displays set up and it was absolutely beautiful! None of us had been before, but I think it's safe to say we will be going back to experience all the seasons there! Here are a few of my favorite pictures from the trip... 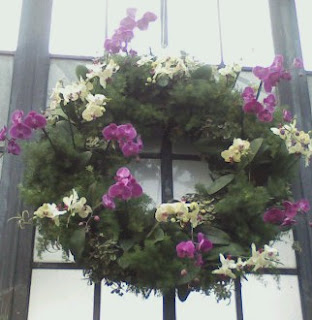 Orchids of some type in the Tropical Room 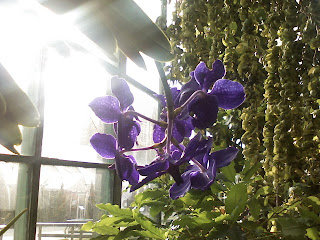 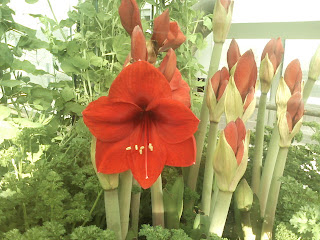 Pop and Dad in front of the "Old-Man Palm tree" 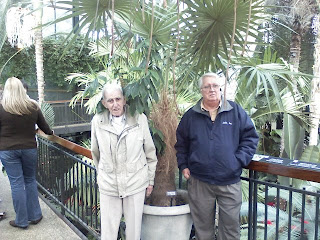 I'm sure anyone reading this knows already, but if you don't... Patrick is a 2nd Lieutenant in the US Marine Corps. He has finally completed all of his schools after going through Officer Candidate School, The Basic School, part of Communications School, and Intelligence School. He even had a brief stint at Manpower where he got some pretty good reviews. I'm so proud :)

As of November 24, 2008 he has moved to New Bern, NC and reported to his duty station at Cherry Point Marine Air Wing. Upon checking in, he received word that he will most likely be deploying the third week of January, probably for about a year. We're still hoping that it won't happen, but it's looking like it will. So keep him in your thoughts and prayers!

After helping him pack up his apartment in Fredericksburg, and put it in a storage unit, pack that up and move it to NC, I will be going down to stay with him and help him find a new storage unit in NC, in order to move out of the apartment I just helped him move into. It's the least I can do since most of the stuff is mine anyways!

And also I'll be able to help him take care of the boys, Jack and Winston (pictured below). 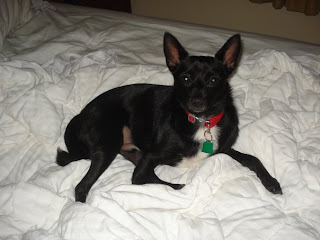 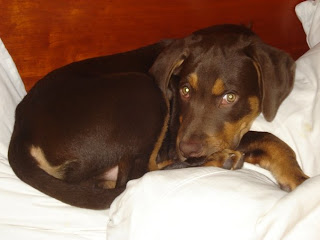 Well I've never done this before, but my sister makes it look easy enough. Since so many new and different things are going on in our lives right now, I thought I'd start a blog to keep everyone updated. It seems like the easiest way to get in touch with the most people. I'll give it my best shot, so enjoy!
Posted by Kalyn at Thursday, December 04, 2008 1 comment: