Since my mom is visiting, we went out and about and saw the local "sights".  That pretty much included the aquarium.  The only indoor activity the island offers in the winter.  And boy do I LOVE the aquarium!
We had so much fun, we stayed for 4 hours.  And folks, let me tell you, it's not a big aquarium.  I think we chatted with every volunteer in there.  The fact that we were the only patrons made that pretty easy.
Highlights included learning all about snakes, alligators and turtles, making a new friend (a cowl nose ray - um can I please get one?) at the sting ray petting pool, watching divers in the shark tank, learning a ridiculous amount about how amazingly important horseshoe crabs are in every day life (www.horseshoecrab.org - check it out... did you know their blood sells for $15k a quart?!), and last but certainly not least:  the sea otters.  Every time I go to the aquarium they are sleeping, but not this time! 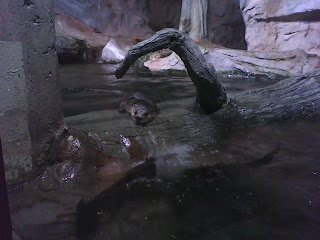 I couldn't get pictures of them swimming and jumping and diving and flipping... but I promise they were! 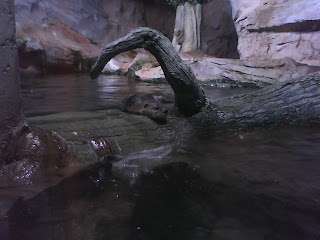 They even stopped to pose for me.  How friggin' cute?!  Can I have one of these too, please?! 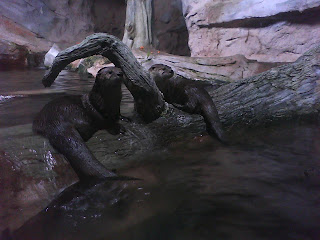 winter on the island

So my mom is in town, and we headed down to the beach to let the dogs run.  And check it out!  The 7 inches of snow we got Saturday hadn't melted yet so we've still got some snow on the beach... 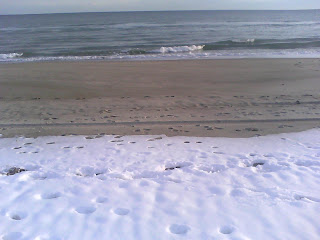 The boys had SO much fun running around in the sand AND the snow... 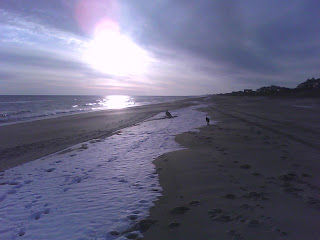 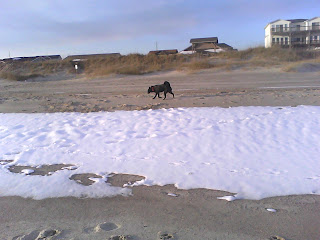 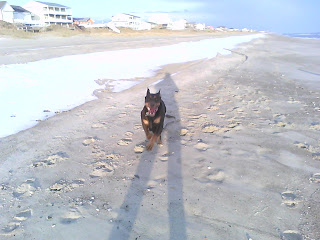 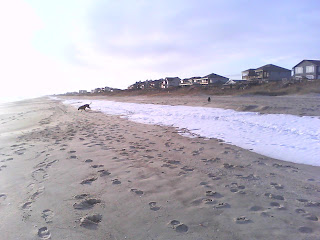 SO much fun in fact that Winston took off after a bird, which flew out over the water, parallel to the beach.  He ran out into the waves and continued after it, half running/half swimming.  I chased him on the sand, and when I was finally able to catch up to him I had to charge into the ocean myself and grab him by his collar, dragging him out kicking and screaming.  OK not screaming, but he wasn't happy the bird got away.  Thanks a lot, dog.
Posted by Kalyn at Tuesday, January 25, 2011 No comments:

It's official.  I win the "Least Domestic Wife" award.  Yesterday I was in charge of making chili in our new crock pot.  Patrick couldn't have made it easier.  He bought all the ingredients.  He set them all out on the counter.  All I had to do was brown the meat and chop up an onion and throw it all in the pot.  Well I did that.  I even checked on it all. day. long.

One weird thing... it wasn't getting hot.  Patrick called to let me know he was on his way home and I mentioned this to him.  He told me to turn it up from low to high.  As I did so, I noticed my fatal mistake.  I never plugged in the darn thing!

I was worried Patrick would be mad since he was SO looking forward to having chili for dinner.  So I waited until he got home, and when I realized that it would be several hours, even on high, for the chili to even get warm... I had to tell him.  He walked in the door, and I asked him how much he loved me.  And I couldn't keep a straight face.  I broke the news.  He looked at me like "are you serious?" which is probably because I was laughing so hard I started crying.  But alas, it was the truth.

Carly told me that it was the best newlywed story she's heard.  So I decided it had to be shared.  Anywho... it's been simmering all day today, so it WILL be enjoyed tonight!  Can't wait! 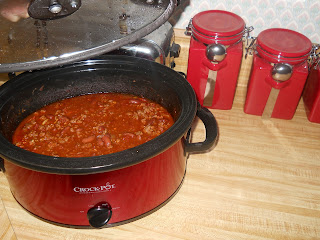 So does it look like this when the rest of the world gets new furniture?  I think there's a living room under there somewhere... 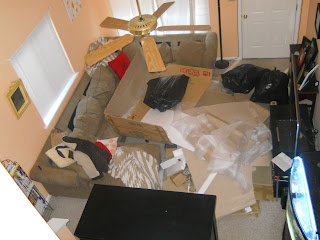 I would be cleaning it all up, since Patrick is on duty today and I've got nothing else better to do... But I've got these two slightly fantastic distractions...
Win, there are no words (please note the sand covering his face) 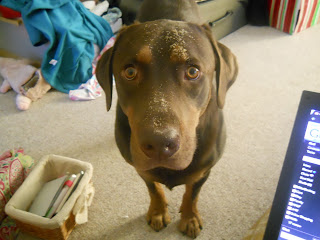 And my baby Jack with his favorite hedgehog toy 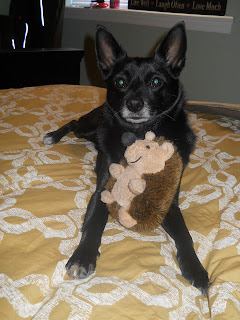 This is just really another distraction... ok back to cleaning!
Posted by Kalyn at Monday, January 10, 2011 No comments:

As I sit here searching for craft fairs to sell my flowers, I ran across this post giving away $75 to the fabulous Emerson Made, my inspiration.  So ladies, if you are and E.M. fan, check it out!  And the blog hosting the giveaway is just too cute that I am excited to add it to my reading list.  Home decor, fashion inspirations, and a picture of a cute doggie to boot.  I am already in love!

PS: if you know of any small, local craft fairs coming up - fill me in on the details!
Posted by Kalyn at Friday, January 07, 2011 No comments:

...on a cloudy day.
Well, it wasn't cloudy.  It was just plain sunny.  And 70 degrees.  On New Year's day.  Pretty terrible right?
Patrick and I spent the New Years 96 (comes from the 96 hours of leave the Marines get) in Charleston at his sister's house with his parents.  It was gloriously warm and wonderful.  It makes me want the next 2 months to fly by so I can lay out in front of the Atlantic in my backyard again.
Here's Kendall and Mackenzie lighting sparklers a little earlier then midnight on New Year's Eve 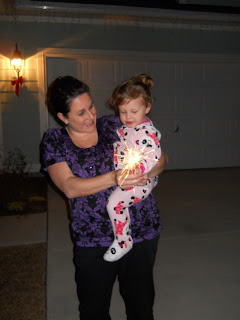 And little Mack Mack with Uncle Pat and his boots :) 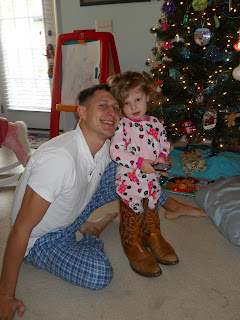 Thanks for the great visit, SC family!  I lucked out with all my in-laws, they are awesome!
Posted by Kalyn at Wednesday, January 05, 2011 No comments:

As promised in this post I have tracked down our picture from our holiday card circa 2008.  It's a little "rag tag" but it was taken in Patrick's kitchen.  When he lived in a hotel.  They have their striped Christmas sweaters on, and look mighty handsome if I do say so myself.
So enjoy, even though the holidays are officially over. 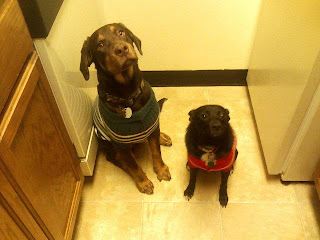