These are a few weeks old, but I wanted to post them so Patrick could see them... Jack and Winston's first snowfall, and just a funny one of me and Win. 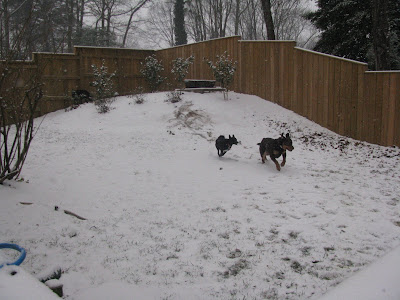 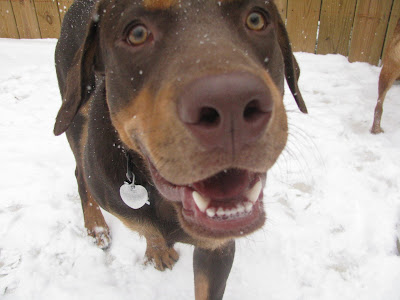 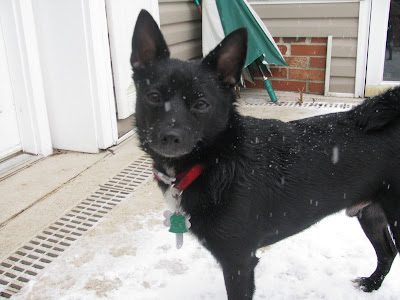 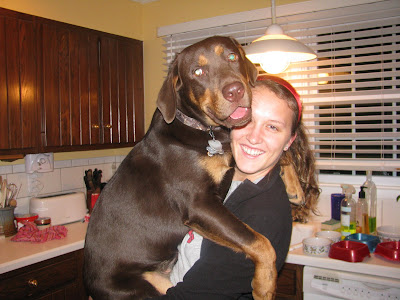 Nothing new and exciting to report from Iraq. Patrick had a little break from work where he thought things were starting to slow down and settle in. That didn't last long as he has become the "go to guy" in the office and they seem to give him lots to do! So he's pretty important, which I always knew, but it's nice that the Marines know it too.


Back home, I have signed Winston up for a basic doggy good manners course. Hopefully he will learn how to walk on leash properly (not drag me behind). And while I love the greeting he gives me when I come home (as if I had left him for years and he was terrified he'd never see me again) I am hoping they can teach him to bring it down a few notches. Classes start March 7th, so we'll see how that goes. If it goes well, I might be taking Jack to an agilities class in May where he can learn how to walk on balance beams, jump through hoops, weave through poles and all that other cool stuff they do on the Purina Dog Challenge!


Last night I went to the Wizards game in DC with Emily and Sarah. Em gets discounted tickets through IBM and we were able to get great seats for not so much money. Here's a pic I snapped with my phone from the game: 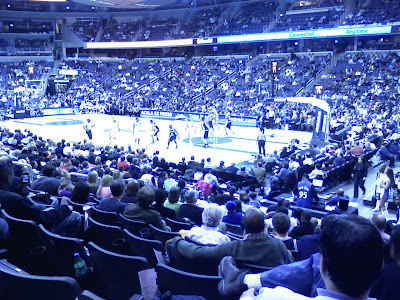 That's all for now. I guess I'm happy that Patrick is bored. If it was exciting, I'm not sure that would be a good thing! So we'll pray that things stay slow and dull over there for him! 47 weeks and counting...

Four whole weeks down! I must admit, after the first week, the next 3 seemed to go by a little bit quicker. Not much, but a little. And every little bit helps. I still talk to Patrick quite often, however I have finally had to deal with missing a call/email from him. I figured it would happen eventually, and it wasn't very fun. I was quite upset to say the least, but I should feel lucky that he's able to call/write as much as he does, right? This time there's nothing really new to report from his end though. He's working on dates for his R&R and I've begun planning a trip for us to take while he is home. So that's keeping me busy. I guess he also gets shorter breaks that he can take for each 6 month period he's over there, so now I am looking into meeting up with him. Anyone know where I can get cheap plane tickets to the Middle East?! Well, the pups are good, missing their dad, but good. That's all for now I guess. Only 48 weeks to go!

Oh I almost forgot! This week marked the second Valentine's Day in a row that Patrick and I haven't been able to spend together. Last year he was out sleeping in a field at Quantico, and this year, well obviously he's in Iraq. But, my sweetheart managed to have a bouquet of my favorite flowers delivered Saturday morning... Here they are, gerber daisies in every color imaginable (not to mention, the sweetest note that could ever come in a bunch of flowers): 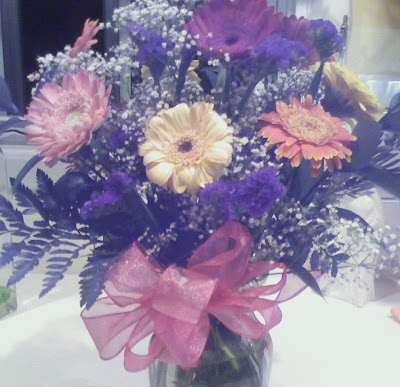 3 weeks of deployment down, and nothing really new to report. Pat's been keeping busy, but he seems to think things are beginning to slow down a little. He has more time to write or call. I hear from him about every other day. He says his aerogarden is blooming and he has gotten 3 of the 4 packages I've sent so far. They're all taking about a week, so that's not too bad. He also gets to put in for his R&R dates soon, so that's exciting, and it gives me something to plan for.

In the meantime, I've been keeping busy with work etc. And I took the boys hiking today. We went with Carly and Emily to Shenandoah National Park and hiked a mountain that we hiked last January. It was a lot of fun, and the pups had a blast getting all muddy. Here are some pictures from our adventure: 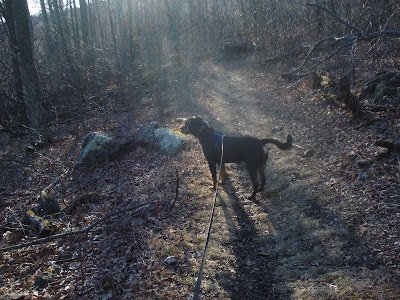 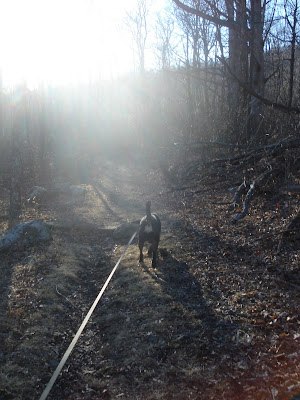 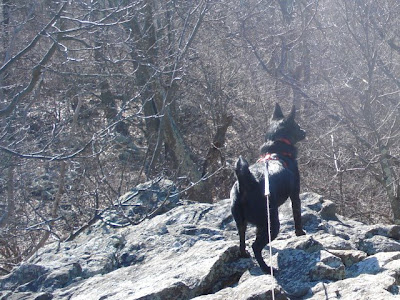 Jacko was a good climber, he seemed to bounce up the rocks! 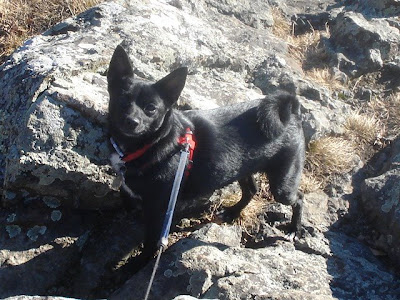 I am posting several videos of he dogs here for Patrick. I tried emailing them and the files were too big, so hopefully he can see them here! The first video is of Jack chasing his tail. He started trying to catch it by sitting down, and even tried to get it between his legs. It was hysterical! Too bad I didn't think to tape it until he was done playing, so this was the best we could get out of him. The second one is a video of some puppy kisses for Patrick. The last one is of Bear and Jack playing (complete with what Pat and I call Jacko's "butt dance"!). Look closely for the butt dance... it's a riot! Enjoy.

Patrick would be proud

Just wanted to put up some pictures of the boys all dressed up in honor of their dad. Patrick and I got them each forest cami outfits from the PX at Cherry Point. Winston's fits great, Jack's on the other hand is tiny, but he still loves it! Pat's cover also fits Winnie rather nicely, but is too big for Jack. Poor Jacko, although in my opinion he still looks mighty handsome. 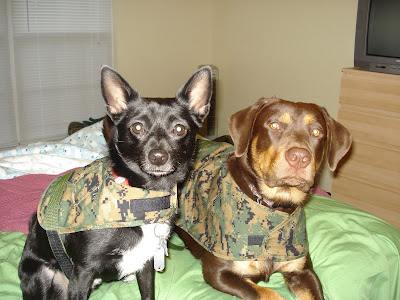 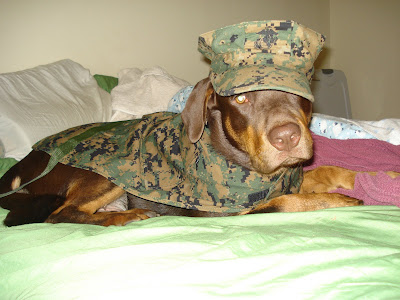 Patrick is also a Steelers fan, and since he was sleeping while the Super Bowl was on, the boys were cheering extra hard for them. Here they are in their Steelers tees, missing dad and watching the game. It must've worked because the Steelers won! Hooray! (Mo, this one's for you too...) 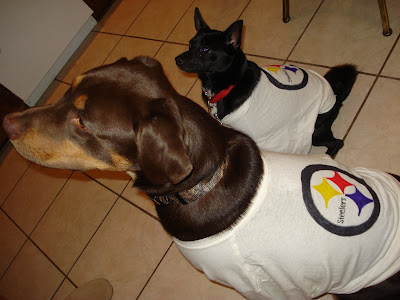 Well Patrick has been gone for 2 weeks now, and boy what a long two weeks it has been. On top of everything we've been going through, my grandfather passed away early yesterday morning after a month long battle with pneumonia. He always adored Patrick and was so proud of him, so I know that good old Pop is up there watching out for him now.

That being said, I've gotten to talk to Patrick a lot this week. Sometimes 2 phone calls a day. He usually calls me when he gets off of work, before he heads back to his can to go to sleep. We also found out that he can call cell phones too, which is good. So now I don't have to sit around the house worried I'll miss a call. He doesn't have much news to report. But he's doing OK. He's called his mom and dad a few times, so I know they're very glad to hear from him just like I am.

I sent him the aerogarden that my parents got him for Christmas, and he told me it arrived today. He decided to set it up in his office since that's where he spends most of his time. He said that when he was setting it all up he plugged it in and shorted out the whole office! I guess it was something to do with the outlets and adapter situation. Anyways, they got everything up and running again and he didn't get in too much trouble. :) So my first package arrived safe and sound, and I'm glad to hear it. I thought the garden and seed kit would have a tough time making it through customs. It also got there relatively quickly, about a week. I've already sent off 2 more packages and have another waiting to be sent! A lot of other people are sending boxes as well, so he's well taken care of.