Since we have been "home" we have spent a little time getting to know the area.  We are staying in the middle of the city, so we are able to walk a lot of places (which is good since we don't have a car yet).  There is a big mall where we have gone a few times to get groceries (yeah... fresh markets in the mall is something I still need to get used to).  And we have just gone to walk around while housekeeping was cleaning our room.  We would walk more outside if it wasn't so windy!  The mall seems nice enough, I only recognized a few shops (Target, Pandora, Ugg) but even though the names are different, the stuff is the same... I'm sure I can still find a way to spend money :)

On one 'wandering' trip, Patrick and I were on either side of Gunnar holding his hands while we all three walked together.  When Gunnar has two hands to hold he has a bad habit of picking up his feet to be swung.  Or sometimes he'll forget to pick up his feet, and he'll just stop walking and we'll end up dragging him a few steps before we realize what he's done.  This time though, he was more sneaky.  Picture us walking, looking in windows, chatting to each other.  It felt like Gunnar was pulling on us for some time, but it certainly didn't feel like we were dragging him, so I figured we were just walking to fast, and we slowed.  I finally looked down to pay attention to what he was doing, and he was walking on his knees.  Who knows how long he had been doing it too!  Now, what does that say about our 21 month old's ridiculous height?  That he was walking on his knees, holding the hands of two adults, and we didn't notice anything amiss.  That's one giant toddler.

He has also learned how to open the refrigerator while we have been in this newest hotel.  He will walk over and help himself to whatever he feels like.  And hiding things in the back of the top shelf doesn't work.  He will reach it.  Lord, help me.

Back to all things Australian... we have met some seriously awesome cab drivers.  As that's our only mode of transportation (Pat's supposed to go check out a car today) we have been in a lot of taxis.  One we called to give us a tour of the city, and as luck would have it we were sent a driver who doubles as a real estate agent, and he was able to answer all the questions we had about the area (and some we didn't know we had)!  He drove us around to look at houses for rent on my list, and the next day we toured one.  It was nice enough, and seemed to fit our needs well.  Mainly, the owner was willing to leave the appliances in for us (because apparently Aussie's take things like refrigerators with them when they leave) which would save us lots of money buying our own.  Hopefully things will work out, and you can look for photos of it soon!

Patrick has also been to the base once, and has been 'out with the guys' a few times.  The three of us also went to a get together with some of the people from his new regiment.  It was a fun bonfire, and they were all so nice.  Bonus:  there were two dogs for us to love on, and Gunnar had so much fun chasing them around.

Ever since I have been mentally decorating our new house (we haven't even sent in the application yet) in preparations for our housewarming party.  I have a list of all the things we need to buy, or that I want to make... Good thing I've already scoped out the home improvement stores, craft stores and thrift shops! 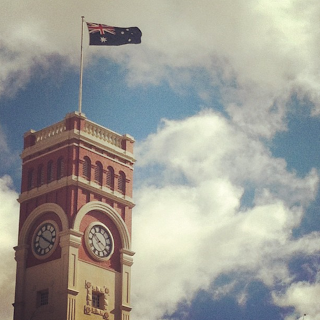 As I mentioned in my previous post we are no longer in Australia's capital city of Canberra.  We were only there a few days, and are now in our new "hometown".  We are still living in hotels, and the one we are in is more of "serviced apartments" than a regular hotel.  That means slightly less housekeeping, but your own washer and dryer, and dishwasher. Plus a kitchen with a full size fridge, and stocked with dishes, and utensils (for eating and cooking).  It's pretty nice, until you have to evacuate.

We have been forcing ourselves to stay up late in order to kick this jet lag, and it's been going pretty well.  Last night I was sufficiently exhausted, and looking forward to a good night of sleep.  The universe had other plans though.  At around 1:30 in the morning we heard a very loud noise that was foreign to us.  Assuming it was probably a fire alarm, but not sure, I jumped out of bed repeatedly yelling "WHAT is that?!" and trying to track down the source of the noise.  I shoved the alarm clock to my ear just to be sure in Gunnar's button pushing earlier he hadn't mistakenly set the alarm to go off.  When the clock, and our phones were found to be innocent of the late night disturbance, I headed for the door, saw nothing alarming, and no one leaving.  Just as I was about to close the door, a gentleman casually stepped into the hall and started walking toward me.  I asked if he heard the alarm too, or if it was just our lucky room, and he said it was indeed at least our two rooms.  He was evacuating and we followed.

Once in the fire stairwell, we saw more people, but not as many as I expected.  We exited the building and found ourselves on the sidewalk with at least two QLD firetrucks, and their crews.  Their main concern seemed to be shutting off the fire alarm in the hotel.  A good sign; it couldn't be too serious right?  Then we noticed the sprinklers going in a restaurant on the ground floor of the hotel.  It appeared to have closed up shop for the night; all the chairs were on the tables.  Once they got the alarm off, they moved to the sprinkler, and seemed to have trouble getting that to stop too... I don't know what the issue was, but I guess we were waved in after a few minutes because simultaneously the crowd headed for the elevators.  We were lucky enough to get in with second group so we didn't have to wait out in the cold too long.

But it certainly was an exciting night!  And it helped me sleep in a little later.  Until this morning, I haven't been able to sleep past 5 am, but today it was 7:30.  Slowly returning to normalcy... 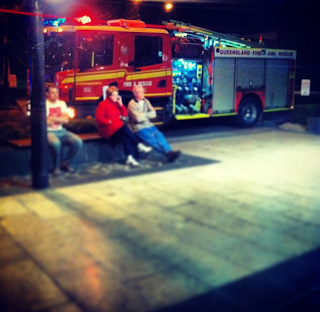 We have left the capital, but while we were still in Canberra, we got to get up close and personal with some kangaroos.

The only people we know on this whole continent are another military family, and they were at 2D Rad Bn with us until they moved here a few months ago.  They had us over for a wonderful home cooked meal, and took us on a hike to see the mobs of kangaroos that roam the preserve behind their house.  It was so cool to see them out in the wild, and there were so many!  I was able to get a few shots of them... see if you can pick them all out: 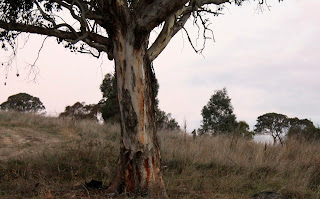 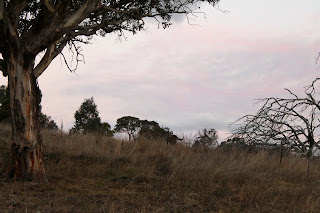 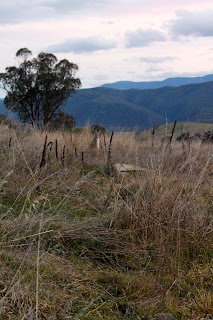 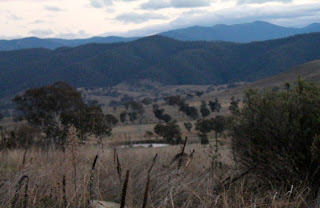 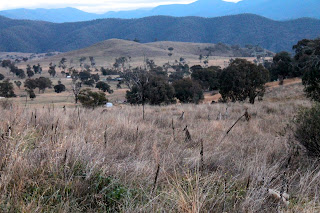 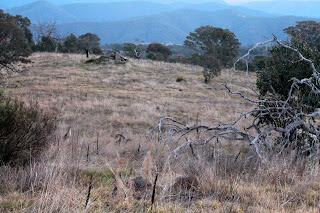 And the beautiful Canberra sunset: 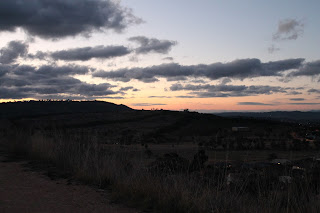 I know it's been a lifetime since I posted last, but life's been a little hectic.  So if there are any of you out there still reading, thank you.

June 6 was a big day for us.  It marked seven years that Patrick has been a Marine, and we celebrated it by moving out of the country.  Finally, we have arrived in the land down under.  The process of getting here was a little rough, but we survived.  I will spare you all the details, but here are the basics:  we spent roughly 20.5 hours on 3 different planes, no one had to be medicated to get through any the flights, we only missed one flight, and we only lost one bag.  We were able to get on the next available flight out of Sydney, and the lost bag arrived 1.5 hours after us, so we just waited for it.  Customs sucked, but that's a given.  The worst part of the trip was by far having to claim our 8 checked bags after clearing customs in Sydney, taking them to a separate, domestic transfer terminal, and recheck them (along with the carseat that wasn't allowed on the last flight).  It was quite the feat trying to steer two trolleys of oversized baggage, tote our 5 carry ons, and pull Gunnar in his carseat.  But we did it.  Did I mention on our 15 hour flight from LA, Gunnar slept for 12 hours straight?  It was in my lap, but still.  The kid is such a jetsetter.

The jet lag is whopping us.  For the two days we've been here, we have laid down for a nap in the afternoon (between 1 and 3) and we will wake up many hours later (usually around 3 or 4 in the morning) ready to go!  It's annoying, but at least we haven't had to buy dinner yet because holy cow is it expensive!  Yesterday we found an awesome little cafe, where I had the most amazing chai latte ever.  I don't think I will be able to settle for American lattes now.  I am ruined.  This morning we stuck around our hotel for breakfast and we tried vegemite, a small bit, but some none the less.  I thought it tasted like soy sauce.  Very salty.

We also spent yesterday walking all over the city, and we visited the Australian War Memorial.  It's beautiful, and they really did a phenomenal job of memorializing the Australian soldiers, airmen, and sailors who have lost their lives fighting for the cause.

I can see how things will take a while getting used to.  I don't know how many times I practically walked out into traffic because I was looking for cars coming the wrong way.  And it's so strange that we just left the heat of the summer, and here it's chilly and the leaves have changed colors and are falling from the trees.  There are also parrots that fly around, and magpies that make the craziest sounds I've ever heard come out of an animal.  We need to be careful though, because they both dive bomb and fly close to the ground.

All in all the first two days have been great, but we are missing our dogs something fierce.  Jack and Win, we love you!  We still have two more days here in the capital, and then it's one last flight north to Queensland and we can begin to house hunt and start the process of getting settled.  We'll do our best to keep everyone updated with info and pictures.  Thanks for all the prayers and support as we embark on this once in a lifetime adventure!  Stay tuned for photos...
Posted by Kalyn at Monday, June 10, 2013 No comments: